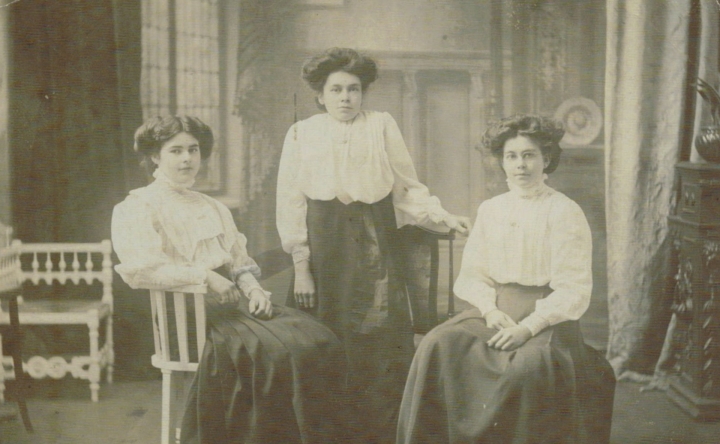 It’s been some time since I continued my “Parentage” posts! Nice hair, right!? Better than mine. (smirk) In the above image are my great-grandpa’s sisters. (Nellie, Maud and Rose.)

Do you give much thought to family history? I enjoy uncovering or discovering things. Unfortunately, only one side of my family showed any interest in keeping these facts and stories alive. Therefore, I know very little about my dad’s side.

I do know that his dad emigrated from England. He grew up in the County of Honiton. His mom grew up in Saskatchewan, Canada, but her father was Irish. My dad doesn’t know anything about his grandmother. He says that she died before he was born.

Though my dad’s side of the family tree is a bit of a mystery, I do have a write-up on my mom’s side. I find these facts really interesting.  They mean a lot to me.

Are they important? All history can be incredibly important. These stories can reveal mistakes as well as successes. They can tell us why we do the things we do, what needs to be corrected or avoided, and the things that we should hold most precious.

This is a portion of what I know about my mom’s side….

Interestingly enough, it seems my grandma was named after his first wife and his daughters inherited his sisters names as there middle names. I think this is really sweet. Obviously heritage meant something to him.

It was after the death of his wife that he decided to come to Canada. On His journey he met three brothers from Kent County who were on their way to Western Canada to a little place called Maple Creek.

Little did he know that later these men would become his brother’s-in-law. (Awe <3) You just never know, do you?

When they arrived at Maple Creek all four men took on whatever jobs they could find. My great-grandpa worked as a farm laborer and eventually got a job as a cowboy. (So he went from a chap to wearing chaps!)

Whether you care much for family history or not there are some things that should be shared and passed down from generation to generation. God Himself wants us to pass on what we’ve learned and know about Him and all that He has done. If things aren’t passed down they’re lost and forgotten.

Thankfully, God’s word will always remain, but will it remain in our homes, hearts and families if we don’t do some digging and then share it? I don’t believe so. The commentary for the verse below sounds a bit harsh and sad. However, it’s so important. Ignorance is only bliss until someone suffers for that lack of knowledge, understanding, and our failure to teach it to the next generation.

We Will not Hide Them

“I will open my mouth in a parable; I will utter dark sayings from of old, Things that we have heard and known, that our fathers have told us. We will not hide them from their children, but tell to the coming generation the glorious deeds of the Lord, and His might, and the wonders that He has done.”

The Charge to Teach

“These are called dark and deep sayings, because they are carefully to be looked into. The law of God was given with a particular charge to teach it diligently to their children, that the church may abide for ever. Also, that the providences of God, both in mercy and in judgment, might encourage them to conform to the will of God. The works of God much strengthen our resolution to keep his commandments. Hypocrisy is the high road to apostacy; those that do not set their hearts right, will not be stedfast with God. Many parents, by negligence and wickedness, become murderers of their children. But young persons, though they are bound to submit in all things lawful, must not obey sinful orders, or copy sinful examples.”