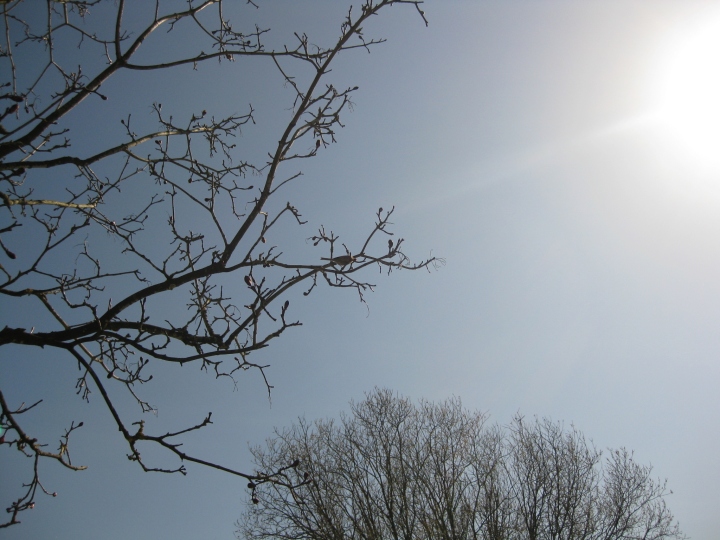 I’m nearly two months behind on sharing these photos so the trees are now completely clad in leaves. How quickly things can change in so little time.

A cool breeze blows over me
It’s a breath of fresh air to know You’re there
As the birds chitter-chatter this lovely Spring day
I’m sure they’re speaking about Your grace.

It’s near impossible for me to get images of birds. I just can’t get close enough. I tried to take a photo of a crow one day. When I aimed my camera at him (or her) it reacted as if I had a gun in my hand, immediately taking to the sky and landing on our neighbors roof. Can you see my sweet little friends in these photos?

There were several little birds bouncing around the branches of this tree. They didn’t seem to mind me standing below them attempting to capture an image. However, I think they almost enjoyed making it difficult for me, as they quickly shifted positions. All things considered I’m pleased with this shot. Even if the fellow in front managed to hide behind a limb. It just proves that they were purposely giving me a hard time. I can still see you, you know.

There are no birds in the photo above. So don’t go searching to pinpoint where Waldo is (or Wally if you’re from the UK) It’s not one of those kind of photos. I just have an obsession with trees and foliage and thought that the new shoots on this beauty were lovely.

This one is much like the photo above: more tree love. Look at the bark! Better bark than bite, right? You don’t have to thank me for giving you a squirrels eye view. If being a bit squirrely keeps me sane, then I’m going for it.

“For there is hope for a tree, if it be cut down, that it will sprout again, and that its shoots will not cease. Though its root grow old in the earth, and its stump die in the soil, yet at the scent of water it will bud and put out branches like a young plant.

“That is, if it be cut down to the root, and only the stump of the root is left in the ground, as the tree in Nebuchadnezzar’s dream, Daniel 4:15, yet the owner of it may entertain a hope that it is not utterly destroyed, but will bud out again; or “change” its state and condition, and become flourishing again: or “renew” itself; and its strength, and put out new shoots and branches; either it will rise up into a new body, as the laurel, as Pliny relates, or produce new sprouts as the willow, alder tree, and others; for this is not true of every tree, though it may be of many; for it is reported of the cypress tree, when cut down, it never sprouts out any more…”

Gill’s Exposition of the Entire Bible

“Beside them the birds of the heavens dwell; they sing among the branches.”

22 thoughts on “Birds and Trees”