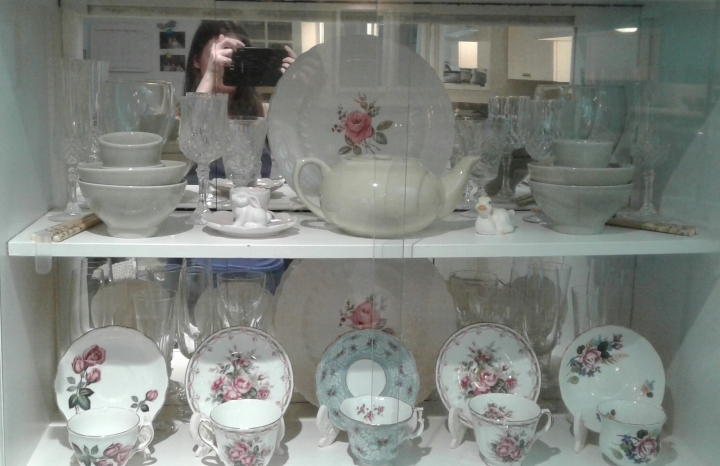 Alright, I can prove that there’s English in my blood despite the fact that my husband insists that I’m more Irish and Scottish. This is likely due to the fact that His “da’s” ancestory is Scottish. Leuk! Ah cannae speak like that!

I can’t do accents. When I described this post to Andrew, I tried to speak that sentence. The operative word there is “tried.” The look I recieved revealed that my attempt wasn’t too impressive. Then he said, “You sound Mexican. And who’s Luke?” (Lol!)

I found a great post titled You Might Be Scottish If... Many of these fit Andrew to a t; He does get teary at the sound of “Amazing Grace” being played on the bagpipes; He is fiercely loyal to friends and family; and is extremely proud of his heritage. He also has the Scottish stubbornness in spades. I have on one occasion threatened to send him to Stubbornness Anonymous. His response was, “I won’t go!” He’s fortunate that I find his antics funny.

A good book and a warm cup of tea sounds English to me. Besides The Bible, C.S. Lewis (especially the really deep stuff) and relics of the past, like Alice in Wonderland, The Secret Garden and the Wind in the Willows are my cup of tea. Apparently, I’m partial to British writers. This is more proof that those Daffodil Daydreams run deep in my blood. But enough about me. It’s time for some tea. Let us proceed to the warm cuppa gathering…

I haven’t been feeling great, but the day that I conducted this “Beeing more English” experiment, it was a better day. Unfortunately, Andrew was under the weather. So I tackled some house work, then set aside some time for tea.

We didn’t have anything on hand that one might serve on such an occasion. No matter, my sweet mother-in-law chanced to drop by with a lemon pie for Andrew, and some apple sauce (for me) as I can’t have anything with gluten. It’s one of the things that triggers my depression. Hence, I dressed up my applesauce with a gathering of fruit. Fancy, huh? Tea has been elevated.

Though my hubby was out like a light for the afternoon, I wasn’t without any company; Our Tabby, Sheya, came to investigate. This was the second time she jumped up to join my tea party.

I’d put my tablet down on the other side of the room to enjoy my tea, so I made the mad dash for it and attempted to coax her back for her photo shoot. But alas, she, too, must be Scottish! Sheya stubbornly refused to jump up. (You know what they say about working with animals!)

Nevertheless, my desire to capture (er recapture) that picture-purrfect moment was equally as strong. Strong like an ox! (Perhaps there is some fiesty Irish in me.) For this reason, I was praying, Lord, please get her to jump up on the chair again. I really want that pic! (Lol!)

She finally listened to one of us. My educated guess is that Jesus has much more pull. (Maybe that should be push.) Sheya jumped up and looked at everything again as if to say, So what is going on here? (Way too cute.) ❤

Next, she sniffed the milk. I think our two cats might be the only felines on the planet that have no interest in it. I’ve heard that milk isn’t particularly good for them anyways. Oddly, she does like orange juice though. She won’t drink it, but this little tiger has been known to lick empty glasses. Now you’re probably thinking, never drink from the glasses at their house. 😆

This experiment was a bit of a flop. I think Sheya knew it. It was far too fancy and fussy for me. I’ve concluded that I prefer my “pretty” displayed behind glass like a sentimental ancestoral monument rather than taking tea to the nines. Unless, of course, anyone wants to serve me tea like I’m the queen. Then I’m all for it. Have at it!

In the comfort of my own home, however, I’ll stick with my favorite Canada mug with the moose on it. Andrew brought this treasure home from work for me many moons ago. It’s been my favorite since. (No, he didn’t pilfer it.)

I’ll save the “pretty” for company, but I’ll keep pausing for tea. I’ve been enjoying my favorite leafy beverage (peppermint tea) in the Death Star teapot that our niece and her hubby bought me for Christmas. I also bought some gluten free cookies. They only taste slightly sawdusty. I’m kidding. 😃 I… er… may have eaten them all already. *blush* (Lol!)

Lately, Andrew has been asking for a cup of Earl Grey. (He also enjoys English Breakfast.) When I informed him he was “Beeing more English” He sneered at his tea and said, “I don’t want it.” Even more amusing is that when we met he thought he was English. He was quite vocal about this too. One fateful day, however, while watching the movie Braveheart, his uncle informed him that he has Scottish roots, not English. From then on it was, Out with that English nonsense! (Typical Scotsman.) Now he’s in total denial of my ancestory. Andrew does do a pretty good Scottish accent. It’s much better than my Mexican version! LOL